Outside our Comfort Zones

How’s your knowledge of biblical geography?

Let’s test it and find out. Here’s a passage from the book of Acts:

6 And they went through the region of Phrygia and Galatia, having been forbidden by the Holy Spirit to speak the word in Asia. 7 And when they had come up to Mysia, they attempted to go into Bithynia, but the Spirit of Jesus did not allow them. 8 So, passing by Mysia, they went down to Troas. 9 And a vision appeared to Paul in the night: a man of Macedonia was standing there, urging him and saying, “Come over to Macedonia and help us.” 10 And when Paul had seen the vision, immediately we sought to go on into Macedonia, concluding that God had called us to preach the gospel to them.

Phrygia? Galatia? Mysia? Bithynia? Troas? Where are these places with strange names, and why are we talking about them?

You may not have the slightest clue where any of these cities are (or were). But, notice something strange. In verse 7, Acts says that Paul “attempted to go into Bithynia, but the Spirit of Jesus did not allow them.” How weird is that? Here is the Apostle Paul, who used to be Saul, the persecutor of the fledgling Christian Church, who was visited by the resurrected Jesus. Jesus specifically called Paul to bring the Gospel, the message of salvation in Jesus alone, to the world. Paul is doing just that. He is going from city to city, preaching the Good News. He wants to go on to Bithynia. But, for some reason, Jesus does not allow him. Instead, God gives Paul a vision to go to Macedonia.

If you were to look at a map, you would see that Bithynia is in the east, and Macedonia is on the opposite side of the map, the west. So, when Paul wants to go one way, God sends Him another. When Paul wants to go left, God makes him go right. Now, you and I are not Paul. But, sometimes life seems to work this way, right? Sometimes, things work out against our best plans or intentions. We are called to new and unknown places, relationships, and circumstances. They stretch us outside our comfort zones. But, who’s really at work? The Spirit of Jesus. Jesus is at work through the church, through you and me, through the places He calls us to in life, to proclaim the Good News to all people.

Here’s another thing. When Paul saw this vision, he was in Troas, which is in Asia. But, Macedonia is in Europe. When God calls Paul to Macedonia, this is the first time the Gospel is proclaimed in the continent of Europe. Think about that. In coming centuries, Europe would become the center of the Christian world. And it all starts here.

For whatever reason, Paul didn’t want to go to Europe. But, God made things go differently. God worked through Paul so that countless people in the future would hear the message of Jesus. In what ways has God made things not go according to plan in your life? What new, exciting opportunities does it bring for you to share the Good News about Jesus? Whatever it is, even if it feels new and uncomfortable, trust that God is work through the church. As a baptized child of God, that includes you. Go into your new situation with faith because The Spirit of Jesus is at work!

(Oh, and if you are interested. Here’s a map of all those cities with weird names.) 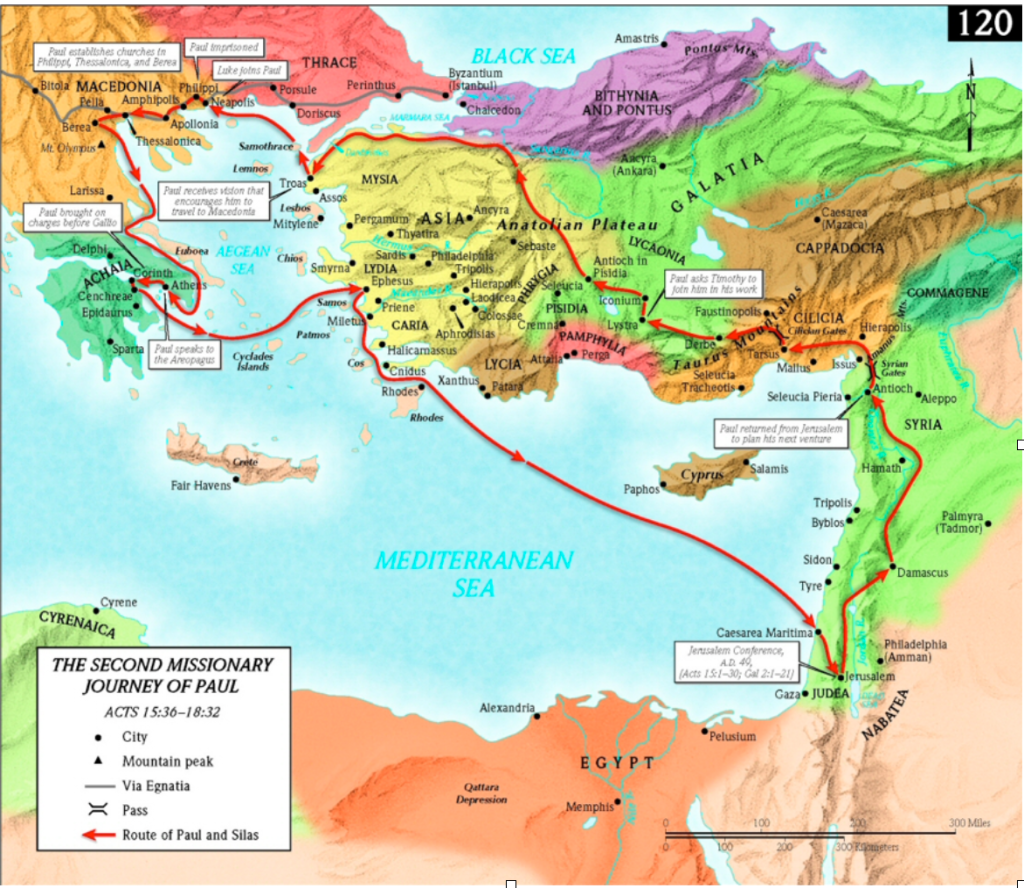